Following an inspiring evening celebrating the achievements of stud and stable staff from across the country at the Godolphin Stud and Stable Staff Awards, James Frank of Hascombe and Valiant Stud has been named as the 2020 Employee of the Year.

James, who also won the Stud Staff Award, was presented with with the perpetual Godolphin Trophy by special guest presenter Oisin Murphy alongside Ed Chamberlin at an event hosted by the British Horseracing Authority (BHA).

Having come to the UK from Zimbabwe in his mid-twenties, James’ belief in leading from the front and setting the example to those he works with has been the hallmark of his 17 years of working in racing and breeding.

Most recently at Hascombe and Valiant Stud, his unswerving commitment to the mares and their foals and his skill with highly strung animals has seen him involved in the early stages of some of the modern greats of Flat racing, including Golden Horn and Cracksman.

James is meticulous in his organisation and forward planning and is held in universally high regard by his colleagues. He helps and encourages others to ensure that his own high standards are replicated across the stud and his love of horses and dedication to his work are an inspiration.

“The panel’s job was as tough as ever this year with some remarkable stories of commitment, hard work and dedication amongst this year’s finalists.

“However, we had to reach a final decision and James is a hugely deserving winner for his years of perseverance and outstanding service to the breeding industry.”

“For James to be named Employee of the Year when our sport employs thousands of people who work so hard to provide first class care to our horses is a fantastic achievement.

“We are grateful to all of the staff who work behind the scenes to ensure that the horses who are bred for and take part in British racing are provided with exceptionally high levels of care.

“These awards are our opportunity to say thank you to all of them, on behalf of the sport and on behalf of our horses, and tonight’s winners and finalists are fine ambassadors for their profession.”

The Awards ceremony took place at The Underglobe on London’s South Bank in front of a specially invited audience from across the racing industry to celebrate the vital role of stud and stable staff in the racing industry and the care which they provide to the horses they look after.

The other category winners on the night were: Kevin Skelton of Bryan Smart Racing who took the David Nicholson newcomer award; Kim Bailey Racing’s Mat Nicholls  who landed the Leadership Award; Hayley Ashcroft from Tom Dascombe’s Manor House Stables who was successful in the Rider/Groom category and Andy Stringer, whose years of service in racing most recently with John Gosden earned him the Dedication award.

Also honoured was Simone Sear who landed the Rory MacDonald award for her work at Racing Welfare.

Employee of the Year: James Frank – Hascombe and Valiant Stud

Brough Scott honoured as he steps down as Chair 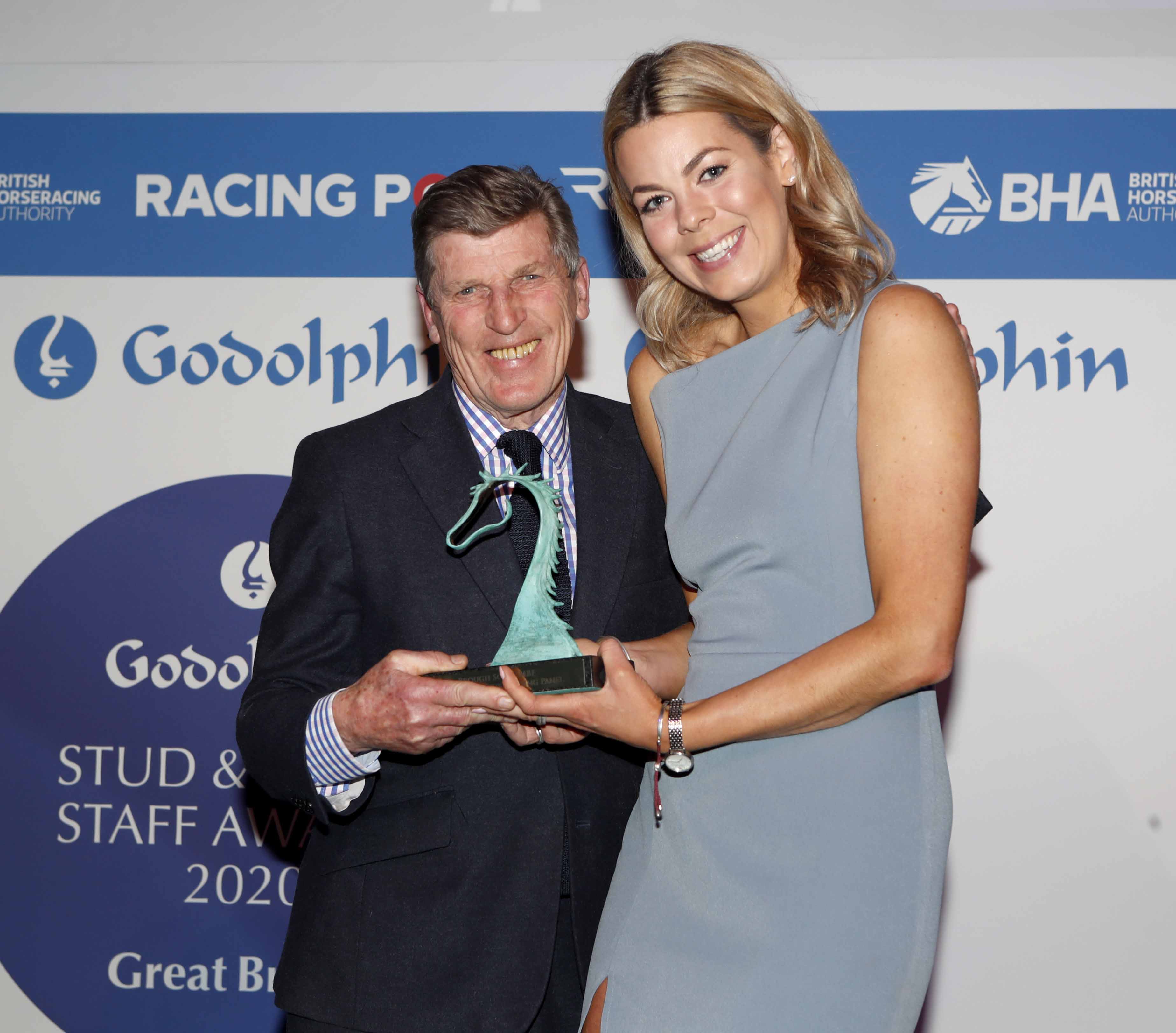 The 2020 Awards also saw the final act for Brough Scott as Chair of the Judging Panel, a position he has held for over 15 years. He was presented with a memento and thanked for his years of service by the 2019 Employee of the Year Catriona Bissett. He will be replaced as Chair by broadcaster Nick Luck.

“It has been a great honour to be involved with these fantastic awards for such a long period.

“Some of the people you hear from as part of the judging team leave you in little doubt that there are some extraordinary people working in racing and breeding.

“I’m sure they will continue to go from strength to strength and celebrate those who do so much away from the limelight to keep our great sport on the road.”

“Brough has played a huge role in the development of these awards from their very early days right up to this year and has been a wise and measured guiding hand over the judging panel and process as a whole for nearly a quarter of a century.

“We owe him a considerable debt of gratitude for all the time and effort he as put in and he steps down as Chair with our warm thanks and best wishes.”

“Stepping into Brough’s shoes will not be an easy task but I’m thrilled to be taking over as Chair and am looking forward to working with the wider Panel to celebrate the inspiring work done by stud and stable staff throughout the country.”

6. The Awards will also recognise an Employee of the Year, who will be selected from the winners of the Leadership, Rider/Groom, Stud Staff and Dedication awards. That winner will receive an additional prize of £15,000, with the same amount going to their yard or stud.