British Horseracing’s International Influence was commissioned to examine how the heritage and quality of British racing can be utilised for the UK Government’s trading and influencing objectives abroad through sports diplomacy. 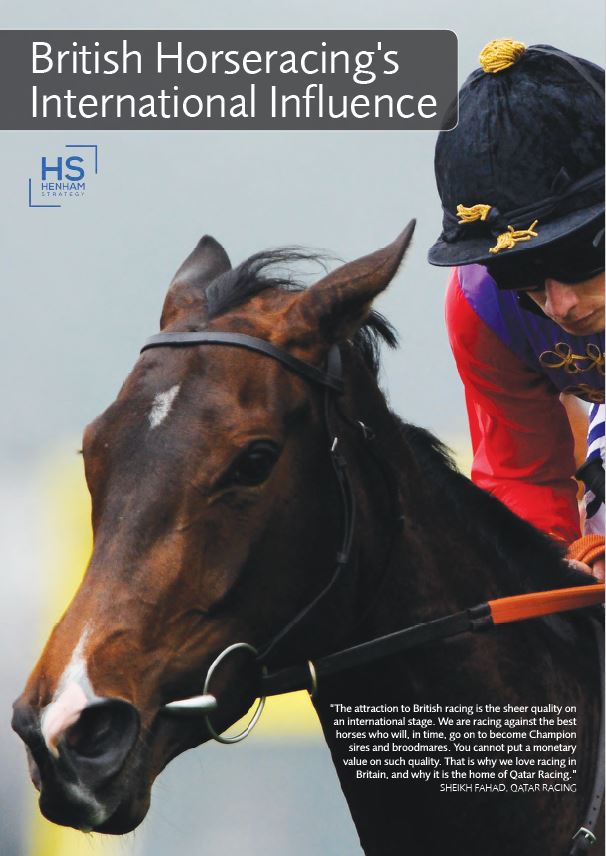 The UK Government is currently developing a “soft power” strategy, which involves maximising a country’s economic and cultural influence to secure diplomatic and commercial objectives, and the report concludes that British racing has enormous potential for the UK Government to take advantage of.

In particular, the report says Britain can benefit directly from Chinese investment in British racing and indirectly by using the extraordinary appeal of global events such as Royal Ascot, the Derby and the Grand National.

Until recently there was little racing on the Chinese mainland but with an expanding middle class, significant wealth generation and a developing passion for equestrian pursuits leading to a burgeoning thoroughbred racing and breeding industry, China remains a huge global opportunity for horseracing.

Two leading Chinese owners in the China Horse Club and Yulong Investments have already had runners at the major British meetings including Royal Ascot and have spent in excess of £16m in the last five years at bloodstock sales in Britain alone.

British racing and breeding officials are now regular visitors to China, looking to export expertise and encourage inward investment in British bloodstock; but today’s report suggests there remains potential for more developed and lasting links between the two nations.

Sir Hugh Robertson, former Minister for Sport and the Olympics and Foreign Office Minister, who launched the report, said:

“We believe that horseracing is a sport at which Great Britain leads the world, and this report demonstrates how our big race-meetings and high-quality bloodstock are already a major international draw. I’d like to see the UK government work more closely with British racing in the future both to promote the sport as an investment and influencing opportunity and to use its powerful international appeal to Chinese audiences and beyond.”

“British racing has long had an attraction to international investors, but China could be fertile ground for attracting new interest.

“There are already a number of Chinese investors who have made significant forays into British racing but there is a golden opportunity for the sport to capitalise on the openings presented by China’s growing horseracing industry and expanding economy.”

The report analyses British racing’s significant international reach and influence, and how its prestigious foundations and consistent quality ensure sustained investment across the globe, making the following recommendations:

“Our ambition is to continue to grow our brand and represent British racing on the global stage and it is enhanced by such an extensive broadcast network with unprecedented reach during the Royal Meeting. Royal Ascot 2019 was once again broadcast live in China through the Sina network, which has 270 million subscribers. This broadcast deal was first struck in 2017 and includes active social media coverage through Weibo, China’s leading social media channel with 600 million accounts.

“China is a very important emerging market for us with an increasing number of owners with interests in British racing. To be able to provide this coverage in China, where the ceremony and tradition of Royal Ascot is of considerable interest, is a key part of our international broadcast strategy. This partnership with Sina presents a crossover of sports and social, introducing the unique culture of British horse racing into Chinese life which we hope will develop into investment into the sport to the benefit of Britain.”