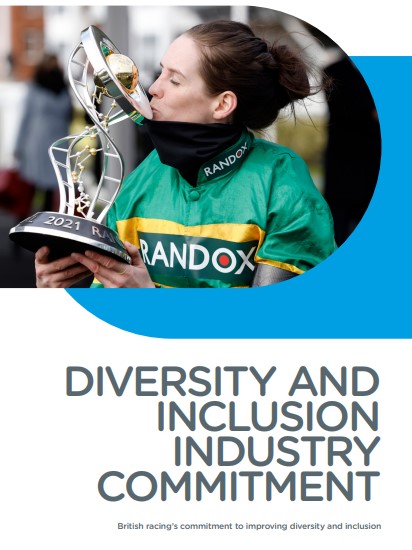 The Diversity in Racing Steering Group (DiRSG) has today published its 2021 Annual Update which combines the announcement that nine more major organisations within the sport have signed up to British racing’s unified Industry Commitment to improve Diversity and Inclusion across the sport.

Arena Racing Company, The Jockey Club, The British Racing School, The National Horseracing College, The Scottish Racing Academy, The Racing Foundation, Racing Welfare, The Pony Racing Authority and Racing to School and Racing Together join the eight key stakeholder organisations, collectively responsible for the operational running and promotion of British racing, who were the founding signatories of the Industry Commitment in May this year.    This is another progressive step for British racing as more organisations from across the sport come together to illustrate their commitment to diversity and inclusion.

The Industry Commitment formalises the horseracing’s approach to Diversity and Inclusion, building on the existing activity already taking place.  Organisation’s that sign up are asked to commit to assigning a Diversity and Inclusion lead at both executive and board level with each identifying their own priorities and activities for their individual organisation’s Diversity and Inclusion Action Plans, which are published on each organisation’s websites and will be reported against annually.  The Industry Commitment is underpinned by the following five pillars:•    Leadership and Accountability•    Good Governance•    Education and Awareness Raising•    Celebrating Racing’s Diversity•    Engaging New AudiencesSusannah Gill, Chair of the Diversity in Racing Steering Group, said: “In a year that has continued to be challenging for so many people, it is heartening and hugely positive to see more organisations across British racing sign up to the Diversity and Inclusion Industry Commitment. This is another important step forward and we look forward to continuing to work with, and support, everyone who is committed to making the sport more inclusive.” Rob Hezel, Chief Executive of the Racing Foundation, said: “We are delighted to sign up to the Industry Commitment and be part of the British racing’s progress on diversity and inclusion. As a funder of improvement we have supported the Diversity in Racing Steering Group and its important work from the outset. It is encouraging to see more organisations signing the pledge, supporting this agenda and contributing to the future sustainability of the sport.” Nevin Truesdale, Chief Executive of The Jockey Club, said: “We recognise that achieving greater inclusion and diversity is fundamental to the future of British Racing. We are proud to have been invited to join the organisations already signed up to the Diversity and Inclusion Industry Commitment. In signing, The Jockey Club and our charity Racing Welfare pledge our commitment to ensuring racing is a truly diverse, inclusive and welcoming sport for all and that we demonstrate this in every way we can.”Dawn Goodfellow, Chief Executive at Racing Welfare, said: “As the second largest spectator sport in the UK, horseracing has a duty to ensure that we are fully inclusive and welcome each and every person equally into the sport. It goes without saying that Racing Welfare is fully supportive of this important industry commitment, and we would encourage other organisations within the industry to do the same.”First Diversity and Inclusion E-Learning module coming in 2022As part of its work to provide educational opportunities on diversity and inclusion, the DIRSG will launch in early 2022 an e-learning module specifically focussed on improving awareness and providing a step-by-step guide and learning experience on Diversity and Inclusion. This will be free and open to anyone involved in the industry to undertake and hosted by Racing2Learn.com, British Racing’s online learning and development platform. It will be supported by mobile, tablet and desktop versions as well as by Recite Me, allowing it to be adapted by visitors to improve its accessibility.  The new module compliments the existing LGBT+ awareness e-learning module, also developed by the DiRSG and Racing with Pride and is currently the most popular voluntary e-learning programme on the platform, with over 800 people completing the module. The DiRSG’s Annual Update shares highlights of the positive steps taken in the sport over the last year by both individuals and organisations. Key developments have included the launch of initiatives like Autism in Racing and the Riding a Dream Academy, alongside industry events celebrating Pride month as well as discussing racial inequality and racism for the first time. To read the DiRSG 2021 Annual Update please follow this link.Notes to editors:1. The Diversity in Racing Steering Group (DiRSG) 2021 Annual Update can be found HERE.2. British racing’s unified Industry Commitment to improve Diversity and Inclusion across the sport can be found HERE.3. For information on this press release contact Rose Grissell, Head of Diversity, 07771 376 384, rgrissell@britishhorseracing.com 4. Formed in 2017, the Diversity in Racing Steering Group (DiRSG) is an independent voluntary body providing strategic direction, advice and support to British Racing to help progress diversity and inclusion. Its work is reviewed and supported by the industry’s Members’ Committee, which comprises leaders from racecourses, participants and the British Horseracing Authority (BHA). 5. The Diversity and Inclusion Industry Commitment was first undertaken in May 2021 by British Horseracing Authority (BHA), Racecourse Association (RCA), Racehorse Owners Association (ROA), Thoroughbred Breeders Association (TBA), National Trainers Federation (NTF), Professional Jockeys Association (PJA), National Association of Racing Staff (NARS) and Great British Racing (GBR) who are collectively responsible for the operational running and promotion of British racing.