Vivien Kyles to join the BHA Board

Kyles was appointed to her role at Hamilton Park in June 2008. She is also Vice Chairman of the RCA, and a member of the Development Board of the Marie Curie Hospice in Glasgow. Prior to this she was part owner of and Chief Executive of Livingston Football Club having bought the club and taken it out of Administration, and also sat on the Scottish Football League Management Committee.

The BHA Board’s other Member Nominee Director, Rupert Arnold, has been reappointed for a further year by the Racehorse Owners Association, Thoroughbred Breeders’ Association and Licensed Personnel. Overall, the BHA Board has gone through significant modernisation in the last year, with ten of its twelve Directors being independent, with a wide range of expertise to help the future health and growth of the sport over coming years.

“I am delighted to welcome Vivien to the BHA Board. For a long time we have been keen to have Vivien on the Board as she brings with her much business, finance and Racing experience, as well as a passion and focus which matches well with the current stage of our industry’s journey.”
Vivien Kyles said:

“I am very pleased to be asked to join the BHA Board having served on the RCA Board as Vice Chairman and been involved in the industry matters which continue to drive our sport forward. The new BHA Board composition is proving very successful and I am looking forward enormously to being part of that.”

1. Vivien Kyles is Chief Executive of Hamilton Park Racecourse, where she took up appointment in June 2008.  She is also a member of the Development Board of the Marie Curie Hospice in Glasgow and Vice Chairman of the Racecourse Association, the trade organisation representing the fifty-nine racecourses in Britain. Prior to this she was part owner of and Chief Executive of Livingston Football Club having bought the club and taken it out of Administration. She also sat on the Scottish Football League Management Committee where she was the first female to hold such an appointment in its over 100 year existence.  Qualifying as a Chartered Accountant with Ernst & Young, Vivien worked in London, Australia and Glasgow including a period advising technology start-ups, before joining telecoms business Damovo.  Starting as Director of Strategy she was responsible for the integration of the group’s 18 countries’ sales forces before becoming head of Global Sales & Solutions.

Vivien does a variety of public speaking sharing her life and work experiences of adapting her business skills to different industries. 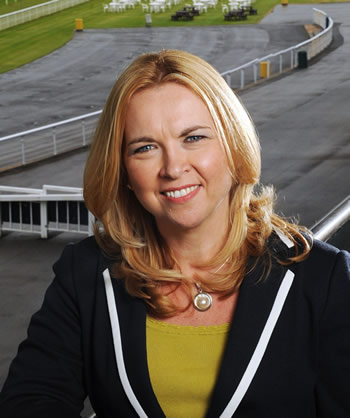